Last fall I hosted a conference at my school that turned out to be a great success.  The idea was to create an event at a high school like no other in the area where passionate presenters and a major conference feel would have attendees leave inspired to initiate innovative change in their instructional practices.    Building upon last year's event I am proud to officially announce Edscape 2011 will be taking place at New Milford High School on Saturday October 15, 2011.  The site just went live this week so there will be many exciting updates in the near future.  For those that attended last year our goal is to provide an even better learning experience!
Edscape 2011 is a conference intended to bring together passionate educators who firmly believe that innovation is essential to increasing student engagement and achievement. Innovation begins with a desire to change. Edscape 2011 will provide attendees with the inspiration, strategies, and the confidence to actively pursue a transformation in teaching and learning practices.
The theme of this year’s conference is “Innovation Now”.  We will explore how learning environments can be established to promote critical thought, inquiry, problem solving, and creativity. Attendees will leave with a greater sense of how to authentically engage all learners through meaningful and relevant instruction.
The 2011 Eduscape Conference will feature presentations and workshops by innovative educators who believe that change is essential to meet the diverse needs of all learners in the 21st Century. They will share best practices, success stories, applicable strategies, and pedagogical techniques that address the following:
Highlights for Attendees
One major change this year is the $35 registration fee.  As many of you might recall last year's event was free.  The problem with this was that 575 people registered, extra food was ordered, and then 100 people didn't show up.  With all this being said I can guarantee that $35 is a steal considering we will still have a vetted keynote, exceptional presenters, giveaways, an interactive innovation learning lab, and delicious food (breakfast/lunch) just like last year.  We will be accepting proposals to present up until July 15, 2011.  If you have procrastinated now is the time to submit.  You can access the form to submit a proposal here.  Stay tuned for hotel information, updated sponsors, and other exciting events associated with Edscape 2011.

I came across this interesting video this morning entitled "Curriculum 2.0".  Check it out below:


This video, as well as the information found at the Curriculum 2.0 wiki, reinforces what I and many others believe, that technology is just one of many tools to assist in engaging students in the 21st Century.  As technology and access to information continue to evolve at a rapid pace my question is when will we see curricula in schools shift accordingly?
Posted by Eric Sheninger at 6/23/2011 11:31:00 AM 5 comments:

As the summer break quickly approaches in the Northeast I have come across various articles focusing on summer learning loss and the negative impact that time off has on students.  In 2010 Time Magazine published an article that clearly articulated The Case Against Summer Vacation.  Even though there is a great deal of research on the loss of learning that occurs during the summer I am perplexed by the fact that many schools and parents are not doing more to prevent this.  Here is a video that shares some stark statistics as well as a few great strategies that parents can utilize at home. 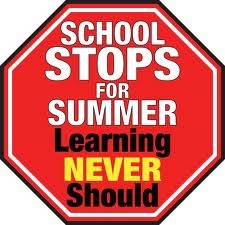 Photo Credit: http://4.bp.blogspot.com/-VHNXuqzW4x4/Tcsd5GQQcqI/AAAAAAAAAQc/mpNCUQrbVR0/s1600/summer.jpg
As a district we have always assigned summer readings (view this years assignment here).  This year we are taking it a step further as we have developed assignments in both Language Arts and Mathematics to lessen the summer slide while retaining a focus on specific skills and concepts learned throughout the past school year.  The math assignments developed by my teachers can be found on our Math Department web page.  When I reminded the students of their summer assignments at our academic awards ceremony yesterday many parents in attendance began to clap and cheer.  This provided some nice validation in terms of our shift towards implementing summer learning assignments.

As a result of a recent $10,000 donation to New Milford High School all students in grades 9-11 have access to Study Island in mathematics and language arts for the next three years.  Certain 12th grade AP students will also have access in the following AP courses: Chemistry, Biology, U.S. History, Calculus AB, English Language & Composition, and English Literature & Composition. The expectation going forward is that teachers will develop standards-based assignments for all students to sharpen and retain skills, review concepts, and get a taste for the content to be learned in upcoming courses.

I am really interested to learn what other schools and educators are doing with their students over the summer to reduce and/or prevent learning loss.  More importantly, how do we construct meaningful, relevant, engaging assignments that the students will want to complete? We all can agree that this is a major problem across our country that the traditional school calendar of 180 days has created for us.   If you have developed successful programs, projects, or assignments PLEASE SHARE!  In the meantime here are some articles that I have come across that present some great strategies for reducing summer learning loss:

Preventing the Summer Slide with DIY Tech and Science Projects

Using the Calendar gap to Narrow the Achievement Gap

Preventing the Summer Slide in Reading

50 Websites and Apps to Keep Students Learning Over the Summer

The following is a summary by New Milford High School teacher Colleen Tambuscio on this year's Holocaust Study Tour.  The post speaks for itself in terms of the impact this authentic learning experience has on our students as well as people all over the world.

The Holocaust Study Tour always provides new and exciting learning opportunities because, although there is an itinerary, the schedule flexes as new educational experiences arise. However, this year, our group expanded to 22 students, the largest ever. While learning about the history of the Holocaust, we became more than just a group of students and teachers. We became a family.

One of the many highlights was the opportunity to meet Eva Vavrencka, the daughter of Felicitas (Lici) Wolf Garda. Lici was the sister of Otto Wolf in theDiary of Otto Wolf (required reading prior to the trip). We are so grateful that Eva, who has never spoken in public about her family's history, was willing to meet with us at our hotel in Prague. We discovered many new aspects of the story including that Otto's diary was smuggled out of Czechoslovakia and brought to America in the 1970's by Lici's half brother, Thomas Mandl. Eva was able to give us insight into Lici's post-Holocaust life, and we are incredibly grateful to Eva for bringing this history from Salvaged Pages to life.

As always, Pavel Stransky continues to inspire us each year telling his story and guiding us to Theresienstadt, the camp where he and his wife, Vera, were interned before being sent to Auschwitz. As Pavel talked to our students, all 22 pairs of eyes were riveted to his face. Pavel, now 90 years old, compassionately and bravely tells of his time in both Theresienstadt and Auschwitz. Tears flowed down the faces of our 22 teenage children, who are now barely younger than Pavel was when the Holocaust began. All day our students approached Pavel and gave him hugs, posed for pictures and asked questions. We are thankful for Pavel’s friendship and the important historical and personal lessons he gives us.

This year the Olomouc Jewish Community invited us to celebrate the Passover Seder with them. Welcomed by Petr and his grandfather, Milos Dobry, our own Sarah Schrenzel sang the four questions in Hebrew. What an incredible evening: first listening to Milos tell his story of surviving Auschwitz; then celebrating what, for many of us, was our first Passover Seder; and finally, being able to share in this experience with the Jewish Community of Olomouc, which includes many of the Holocaust survivors that we interviewed during last year’s Holocaust Study Tour. How thankful we are that the Olomouc Jewish Community is helping us next year with our dedication at Trsice.

A new facet to our relationship with the community of Trsice was the presentation of a special pin by Colonel Zuffa-Kunci of the Czechoslovak Legions in Olomouc, to our group’s leader Colleen Tambuscio, in recognition of the special relationship which has developed between the Czech people in the Olomouc region and American students through the Holocaust Study Tour program. We have been working with the local community to further commemorate this story by building a memorial to mark the site of the underground hideouts in which the villagers of Trsice hid the Wolf family for three years during the Holocaust.

The most unexpected learning opportunity occurred inside the villa of Amon Goeth, commandant of Plaszow Concentration Camp, where Spielberg filmed parts of Schindler's List. After visiting the area of the camp where today lay the ruins of the Jewish Burial Hall and a memorial to Sarah Schenirer (this is the area of the camp that the HST 2009 participants cleaned up), we walked to the villa of Amon Goeth. While looking at the house from the street, we saw a gentleman come out of the doorway and wave us up the walkway. We, of course, approached the house with Shalmi, our historian for the trip, and Ewa, our Polish guide, and immediately took him up on his offer to come inside. This was an incredible chance meeting that demonstrates the importance of experiential learning and its possibility for rare opportunities that become profound teachable moments.

New this year was our overnight hotel stay at Auschwitz--actually in the town Osweicim. We entered the town, passing by Auschwitz I, which is now a museum, and also passing through Auschwitz III, the industrial complexes of Monowitz and Buna. The hotel and town center are just down the street. It is impossible to believe that anyone who lived here during World War II can say they didn't know what was happening in these camps. By the time our group reached Auschwitz, we had bonded completely. Before dinner, we debriefed about our visit in Trsice, and ended the session with a giant family hug.

Each night we ended our day of learning with journaling and discussion, and of course, the blog. Our blog has taken on an important, impactful role in the Holocaust Study Tour. Not only is the blog a way for us to focus and communicate what we are learning as we travel, it is has tremendous impact on student learning. Each night we choose students to post their reactions to the day, using their reflections from their journals. Our followers post comments, and students react and really process their learning.

The Holocaust Study Tour is unlike classroom learning not only because students experience the history through firsthand encounters, but also because they learn that history is dynamic, and that as time passes, we unearth more of the history. History is not just about the pages in a textbook. History is the story of real, living people, like Pavel Stransky, Mrs. Ohera, and Eva Vavrencka. The history lessons will continue to impact all of us who journeyed together in our Holocaust Study Tour 2011 family.

How Are You Changing the Culture of Teaching and Learning?