The Everlasting Influence of a Great Teacher

Over the years, I have made the point of highlighting some of the many teachers who not only had a positive impact on me as a student but also have a tremendous amount of influence on me today.  In Disruptive Thinking in Our Classrooms, the stories of Mrs. Williams (kindergarten), Mr. South (middle school science), and Dr. Hynoski (high school science) were shared.  While each in its own right had an incredible impact on me as a learner and person, it wasn’t until recently that I reconnected with Mr. Wynn, my former art teacher, on Facebook.  He, by far, might have had the most significant influence on my development, and I am excited to share his story.

I attended a rural consolidated school in northwestern New Jersey for grades kindergarten through eight.  There were only two teachers per grade level, and the principal was also the superintendent.  My memory is a bit fuzzy, but I believe we only had one art teacher, Mr. Wynn.  This meant my classmates, and I were able to have him as a teacher multiple times over the years.  He was also the soccer, baseball, and softball coach.  I am not sure why we didn’t have baseball at the school even though we did at the recreational level.  Like many of the most influential teachers, Mr. Wynn was involved in as many things as possible that had an impact on kids.

To say that he is a gifted artist is putting it modestly.  All one has to do is see his personal artwork that he shares routinely on Facebook.  Once we connected in this space, it brought back so many powerful memories through the powerful pieces he shares.   Each image has served as a reminder of sorts.  In my mind, I was not a good artist and struggled even to draw a coherent stick figure.  However, Mr. Wynn was never negative and always provided positive feedback on my work while motivating me to make improvements.  I absolutely loved anything to do with ceramics and watercolors.  His class was one that I looked forward to not just every year but also every day.

There are many attributes that Mr. Wynn possessed that made him a great teacher.  I believe these are shared by all who have an everlasting influence on a student’s past, present, and future.  These teachers: 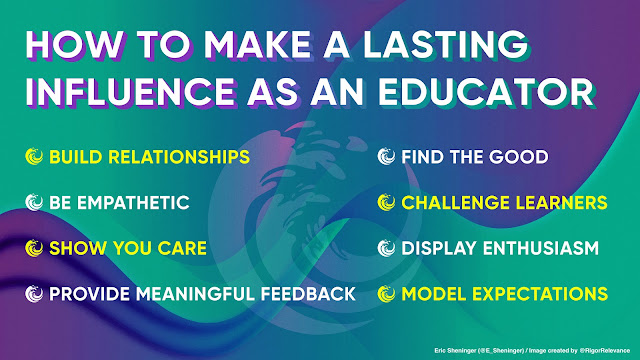 While I am always in awe of what Mr. Wynn shares on Facebook, it wasn’t until I began to prepare for my new keynote at the Model Schools Conference that his impact resonated more loudly than ever.  Matt Thouin, one of my amazing ICLE colleagues who always pushes me to be better with fantastic feedback, suggested that I weave in more personal stories to connect with my audiences.  At this point, I knew I had to incorporate the everlasting influence that Mr. Wynn has had, and continues to have, on me as a person.  As I prepared, I dreamed that I would be able to include some of the artwork that I created in class.   I knew I had at least one ceramic sculpture, but little did I know that there was a treasure trove of artifacts lying in wait in my attic.

Over the holidays, my parents drove to Texas from New Jersey and dropped off a bin of items they had kept and stored for years.  As I searched my attic with a flashlight, I came across this and, when I opened it up, realized that they had saved artwork and projects going all the way back to my kindergarten years.  Tears rushed down my face as I could not explain in words how meaningful these items were as a flood of emotions pummeled me all at once.  Almost all of the artifacts came from Mr. Wynn’s class, including a fully functional ceramic snail that holds pencils and pens.  Below you can see not only this but also many pieces of artwork created in his class.

What I learned after my trip to the attic and writing this post is that I was not as bad at art as I initially thought.  While I never aspired to be an artist, I can confidently say that Mr. Wynn helped me become the educator, father, and husband I am today.  I am also willing to bet that anyone who had him as a teacher agrees.  Thank you, Mr. Wynn, for your commitment and dedication as a teacher and coach.  You, and every other great teacher who embodies those same principles, have and will continue to have an everlasting impact on students.