Leadership is a Choice

I remember back to my days as an elementary student. Boy did I have a warped sense of what leadership really was. Back then at recess leaders (on the playground that is) were perceived as those who had the most athletic ability. It was these individuals who were always in a position to select the kickball teams or control the organization of literally every activity. This was not only accepted, but also embraced by every kid.  Herein lies the problem though. Social hierarchy determined how the teams would be organized. One by one kids were picked based on how well he/she could kick a ball.  This always left a feeling of dread among those kids who were picked last every time.  In this example I, like many of my fellow classmates, made the conscious decision not to step up and lead.

Maybe the example above is not the best one to articulate my view of leadership, but then again maybe it is. Upon reflection it has taught me a great deal about what leadership is and most importantly what it isn’t. We first have to look at the underlying methodologies of how society determines or anoints leaders.  There are many assumptions when it comes to leadership. One that is regularly portrayed is that leadership is somehow an inherent trait that is either passed down from generations or bestowed upon someone. There is no leadership gene that I am aware of and monarchies have for the most part become a thing of the past. Another prevalent assumption is that leaders are granted power and influence through their titles or positions. In some cases they might have power, but this begs the question as to whether having power is really a characteristic of our most effective and influential leaders.

We need to move past preconceived notions as to who qualifies as a leader. There is no ownership of leadership. It has very little to do with titles and positions, especially in the context of education.  Do not accept the notion that all leaders are born or appointed to a position of power.  Leadership is a choice and something that Stephen Covey has written about extensively.


"Most of the great cultural shifts — the ones that have built great organizations that sustain long-term growth, prosperity and contribution to the world — started with the choice of one person. Regardless of their position, these people first changed themselves from the inside out. Their character, competence, initiative and positive energy — in short, their moral authority — inspired and lifted others. They possessed an anchored sense of identity, discovered their strengths and talents, and used them to meet needs and produce results. People noticed. They were given more responsibility. They magnified the new responsibility and again produced results. More and more people sat up and noticed. Top people wanted to learn of their ideas — how they accomplished so much. The culture was drawn to their vision and to them."

The most influential and impactful leaders I know are those who: 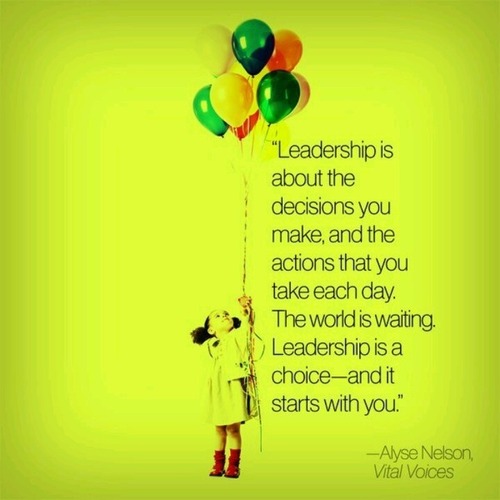 Everyone has the ability to lead and our schools need more educators to embrace this challenge. Never underestimate your own unique talents and abilities that can help shape the future of our schools to create a better learning culture that students deserve. Some of our best leaders are right under our nose – our teachers and students.  Great leaders not only understand this, but also help these key stakeholders make the choice to lead.