It's All in the Design

The other day I was fortunate to attend a training session on the new Chromebook at Google's New York City offices.  The Chromebook itself turned about to be an intriguing device that clearly has an upside as an educational tool in schools.  It boots up in 8 seconds, has a sleek user interface, is very light, and allows you to pick up right where you left off when you log onto another device.  While engaging in professional development throughout the day I was amazed by the Google office and workspace structure as we had an opportunity to explore a little bit as me moved between sessions and lunch.  I have heard many rumors about life at Google and was extremely surprised to see that most of them were true.  Here is a quick snapshot: 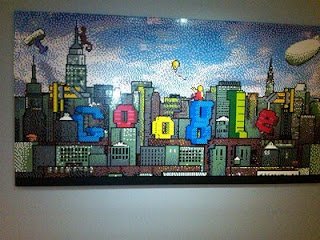 The atmosphere described above along with Google's 80/20 Innovation Model really inspires and motivates employees to perform at a consistently high level.  Who wouldn't want to work here in this type of environment?  Now imagine if schools adopted a similar thought process and designed learning as well as common spaces using several of the principles described above?  It gives me chills thinking about the potential this could have on increasing achievement, motivation, and developing a passion for the learning process.  School would become a place where students couldn't wait to get to and at the end of the day would be reluctant to leave.  School re-design needs to become part of the education reform conversation.  Is my thinking that far-fetched? What would your perfect school environment include?
Posted by Eric Sheninger at 9/25/2011 09:59:00 AM