When I reflect on my childhood, there were numerous profound experiences that impacted my trajectory. I still vividly remember spending my summers in Ocean City, NJ, where one set of my grandparents resided.  To this day, there is just something magical about the beach.  My grandfather Robert Lewis had many hobbies that intrigued my brothers and me.  One of them was making jewelry. While could craft any stone into something beautiful, he often chose amethyst as purple was my grandmother’s favorite color.  He was also fond of using opals, which my mom really loved.  It was so interesting that we asked for a rock polishing machine so that we could attempt to make our own jewelry. Though not as successful as him, we did create some interesting pieces.

There was another hobby of his that captured my attention even more and that was surf fishing.  I really didn’t care if he even caught anything as long as I was able to venture with him to the beach and look for shells or sea creatures. On successful days I would bring back live sea stars and hermit crabs in a bucket. It wasn’t until I was a bit older that I discovered this wasn’t the best of ideas. When my grandfather did catch fish, he would put them in either a bucket or a small gully for us to watch.  Even though his intended target was flounder, he always seemed more successful hooking either sand sharks or blue-clawed crabs. Nonetheless, I got my parents to buy a field guide so I could learn more about local marine life. While my time with him was much too short, his influence on me was and still is strong. I eventually pursued and received a degree in marine biology.

Each example above shows the power of curiosity as a trigger for learning. Whether it was the hobbies of my grandfather or just being on the beach, each experience entailed observations and questions, which led to further exploration fueled by intrinsic motivation. Brain research validates how critical curiosity can be when it comes to learning. Here is an excerpt from a 2014 article in Scientific American by Daisy Yuhas:

“Researchers asked 19 participants to review more than 100 questions, rating each in terms of how curious they were about the answer. Next, each subject revisited 112 of the questions—half of which strongly intrigued them whereas the rest they found uninteresting—while the researchers scanned their brain activity. During the scanning session participants would view a question then wait 14 seconds and view a photograph of a face totally unrelated to the trivia before seeing the answer. Afterward the researchers tested participants to see how well they could recall and retain both the trivia answers and the faces they had seen.

They discovered that greater interest in a question would predict not only better memory for the answer but also for the unrelated face that had preceded it. A follow-up test one day later found the same results—people could better remember a face if it had been preceded by an intriguing question. Somehow curiosity could prepare the brain for learning and long-term memory more broadly. This, it can be concluded that Curiosity boosts people's ability to learn and retain new information, thanks to key reward and memory centers in the brain. ... For questions that they were curious about, participants remembered answers better than for questions in which they were less interested.” 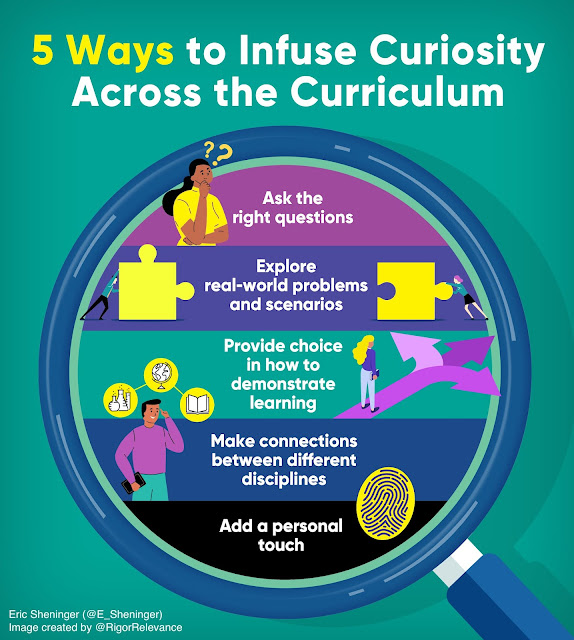 Here are some ways to seamlessly infuse curiosity across the curriculum:

In the words of Ken Robinson, “Curiosity is the engine of achievement.”