A Five-Step Process for Resolving Conflict

When it comes to a thriving school culture, many factors can derail progress. While lack of resources, too many mandates, unclear vision, and a lack of accountability might be at the top of the list, I feel that conflict, especially internal, possesses the greatest threat to achieving goals and improving outcomes.  While this has always been a part of human nature, it is interesting to observe how it plays out at an individual level. Some people avoid conflict at all costs, while others actively look to incite it for reasons that don't make much sense. Regardless of one's stance on the issue, the result can erode culture.

I wish I could say that conflict is avoidable, but the fact of the matter is that it is not. Conflict materializes when one person or group perceives that someone else or others have taken actions to adversely affect something that is cared about. The adverse effects can include lapses in productivity, leaving for another position, work disruptions, falling behind on deadlines, absenteeism, and emotional stress. It goes without saying that none of these potential outcomes are positive. Thus, it is crucial for all educators to have a plan to address conflict using a proactive approach. While the purpose of this post focuses on adult interactions, the same methodology explained below can be used to help resolve issues between students.

Here is a simple five-step process that can be used to resolve conflict. 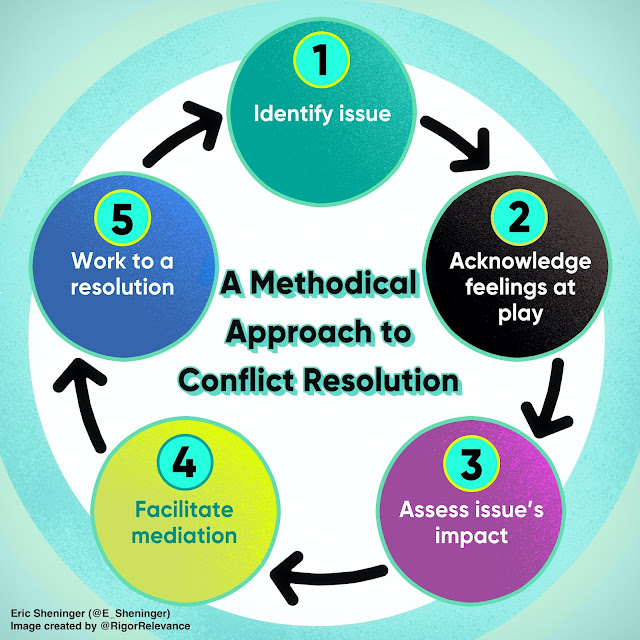 Identify the issue or problem: Typical catalysts include gossip, unclear communication, insensitivity, bullying, misunderstandings, and poor work ethic. As mentioned previously, some people live to start and sustaining conflict. If this is the case, it is vital to be proactive in dealing with these people so that they don't constantly erode culture.  Sometimes the best resolution, in this case, is termination.

Determine the feelings at play – Every catalyst that sparks conflict is fueled by various feelings such as anger, animosity, hurt, embarrassment, fear, and frustration. Knowing what feelings are being triggered is critical for the next step.

Figure out the impact of the issue or problem – Earlier in this post, I identified some general negative impacts associated with conflict. Other topics such as individual performance, group dynamics, relationships with students and families can materialize. Once the specific issue or problem is identified, a course of action can be put in place.

Facilitate a mediation: Once all pertinent information is gathered, get people in a room, allow them to air their concerns, ensure there is equity in terms of speaking time, and listen intently without passing judgment. Mediation is about both parties airing their grievances to set up reconciliation through an agreed-upon resolution.

Work to a resolution – Here is where you need to be actively involved and embrace the role of negotiator.  A solid first step is to help the parties understand their way of dealing with conflict.  Only then can a resolution be achieved.  Consider using the Thomas-Kilmann Conflict Mode Instrument (TKI).  There are five major styles of conflict management—collaborating, competing, avoiding, accommodating, and compromising. The end goal is to have each party agree on a resolution where they see a mutual benefit and the impediment to a positive culture is removed.

Effectively identifying, understanding, and managing conflict is critical to both organization and individual success.  In the end, the overall goal is to control issues that can spiral out of control. However, conflict resolution can also lead to setting up more positive outcomes related to culture once people or groups learn to understand and appreciate one another more. After all, some of the best ideas materialize through conflict.