Putting What I Learned Into Practice: Getting People on the Bandwagon.

One of my goals when I present on leadership, change, and transformation is to inspire other school leaders to begin to blog.  I remember years ago my initial hesitation to blog until Ken Royal encouraged me to submit a guest post on his blog at the time almost three years ago.  With that being said please welcome Paul Vieira, Principal of East Bridgewater High School (MA), to the blogosphere. Below is his first blog post as an educator.

I have been inspired by what I learned at the NASSP Annual Conference last week, a recent blog post by Carrie Jackson, and my conversations with Eric Sheninger and Patrick Larkin to write my first blog about getting administrators in East Bridgewater on Twitter. 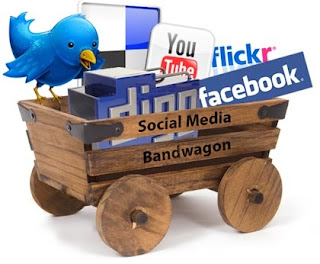 Image credit: http://tpreskett.blogspot.com/2011/10/in-post-social-media-supporting-teacher.html
I joined Twitter this summer because I wanted to see what the buzz was all about. I tinkered with it, followed a few people, and re-posted some tweets over the next few months. It wasn’t until this fall that I started following the right people and the right hash tags. I began to see the power of Twitter as a professional development tool. I was able to learn from other educators and ask questions for things that I wanted to learn more about. Currently we are piloting the iPad with a small group of teachers. We hope to roll out a 1:1 initiative during the 2013-2014 school year. Twitter has served as a great resource to learn about 1:1 initiatives, how to roll them out, and how they can improve student engagement and learning. It also has been very helpful in obtaining information on useful apps to share with staff to help them use the iPad in their classes. Last month Pat Larkin was kind enough to put together a 4 hour PD day at his school for us to learn from him and his teachers. This was free PD and one that was made possible through a relationship that was fostered on Twitter.
This October I put together a one hour introductory Twitter lesson, with the help of my assistant principal, for teachers. We went over the basics of Twitter and how teachers can use it to learn as educators, expand the walls of their classrooms, and share information with students. A few teachers joined Twitter after that session. It wasn’t until my Faculty Meeting in February that I really started to see Twitter begin to gain some momentum in my school. I asked a few teachers that use Twitter to explain to the staff how they use it in school and this started a very brief discussion on the power of Twitter. The real excitement happened over the next few weeks when I saw more and more teachers begin to join Twitter and follow each other. They have joined the bandwagon and we have started to have discussions in school about Twitter. I never thought I would hear people say, “Hey, I saw you on Twitter last night.” “ ”I saw that article you reposted.” Or “Wow, you were really busy last night on Twitter, you reposted 15 articles.”  We are learning from each other and Twitter is making us better educators and teachers.
Now the next step for me is to get my district level administrators and colleagues on board. I was going to use the same PowerPoint I used with teachers last fall but I decided against it when I realized it was awful. And it was only awful in the sense that I have learned so much since I first created it. My knowledge of Twitter and what it can do has grown so much in the past few months that I needed to create a new one. Using information that I learned from Eric Sheninger's presentation this weekend and Carrie Jackson's post from earlier this week, I will highlight the 4 reasons to join the conversation today: “Free Professional Development, Sharing Ideas and Getting Feedback, Telling your Story, and a Personal Reflection Tool” (Thanks again Carrie) and get them on board. My hope by the end of this presentation and the end of this year is that people are not asking the question why should I Tweet?  But asking telling people why wouldn’t you Tweet.
I will let you know how it goes.....
Posted by Eric Sheninger at 3/15/2012 09:50:00 AM